Goliath VR is a local multiplayer game that uses one player’s real physical body to extend the level for the other player. The player Goliath controls a huge body representation that can be used by the tiny player David as an extension of the Level. Goliath VR was created within a thesis to demonstrate the importance of the real physical body in VR.

The two players are named Goliath and David and the playing experience for each of the players is completely different. Goliath controls a real time created body representation by moving his own body. David is controlled with mouse and keyboard like in any Jump&Run game. The displayed body of Goliath can be used by David as an extension of the level. Goliath can help David to cross abysses or reach higher platforms. David is highly vulnerable to fire and other dangers so Goliath must help to protect David by warding off fireballs or lava streams. Both are locked up in a lava cave, and only by working together and collecting coins and keys they can manage to open the final door to freedom. 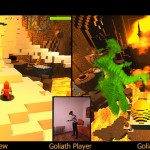 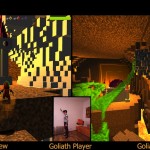 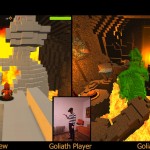 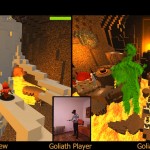